From the Chairman’s Desk 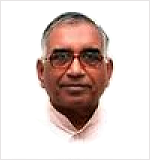 The industrialization of Aurangabad picked up the space after Bajaj Auto established its largest manufacturing facility in Waluj Industrial Area of MIDC. Aurangabad lacked of basic facilities which would be conducive for inducing the talents required for manning the industries to come to Aurangabad.

Other than Govt. Medical College and Hospital, there was no other medical facility available and the Govt. Medical College and Hospital was always over crowded. Therefore, towards late 1980s some Doctors and Industrialists came together and formed a Trust “Marathwada Medical & Research Institute” (MMRI) and under this Trust starting of a hospital was conceptualized. Bajaj Auto came forward as a major funding partner and the Trust out of gratitude named the hospital as “Kamalnayan Bajaj Hospital”. The hospital was to cater to the growing needs of the region and also provide the latest in medical services at affordable cost. The hospital has, for over three decades, established itself as the hospital of first choice to thousands of patients from all over Maharashtra. A constant endeavour to deliver excellence, an atmosphere of competence and the ever friendly staff have ensured that it ranks as the best referral hospital in Marathwada and in this region of India.

In the year 2007, MMRI established the first Linear Accelerator for Radiotherapy for cancer patients. As it was a great milestone in the region, we had the privilege of getting this facility inaugurated by the then Hon’ble Chief Minister and Health Minister of Govt. of Maharashtra. During inauguration both the dignitaries strongly recommended the nursing college run on the principles of ethics and value based education without any commercial consideration should be started by Bajaj Group and thus Mr. Rahul Bajaj, Chairman, Bajaj Auto directed that the process of starting a nursing college be initiated.

After getting all the approvals from Maharashtra Nursing Council, Indian Nursing Council, Maharashtra Govt. and MUHS the nursing college was started in the academic year 2010 – 2011 to impart quality nursing education to young boys and girls particularly from the weaker section of the society so that they enter the nursing profession as fully competent with sound knowledge and skills necessary to deliver value based holistic health care with compassion and devotion. This college charges minimum tuition fees and is supported by Kamalnayan Bajaj Hospital financially.

I wish to assure parents and students who are seeking admission to Kamalnayan Bajaj Nursing College that you are getting connected with an institution which will shape up your future in the best possible manner in nursing profession at minimum cost. College is supervised by the Doctors and supported by the nursing staff of the college as well as Doctors in different disciplines of the hospital so that quality education is delivered.

I welcome the students who will join the Kamalnayan Bajaj Nursing College and advise them to use the facilities and the environment with devotion and hard work and go out of the college by passing with highest grades giving happiness to your parents, society and to the patients who will look upto you as God and Goddesses at time of their illness.